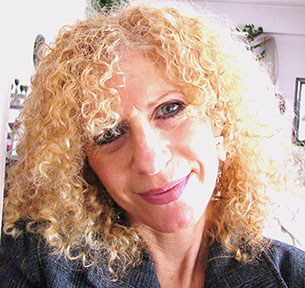 Born and raised in New York City, Caren Jo Shapiro is a visual artist and psychotherapist working in private practice. She earned a Bachelor of Art in 1983 and went on to earn a Masters in Fine Art in 1984 from the School of Visual Arts – New York, a Masters in Social Work in 2005 from NYU and a Postgraduate Therapy Degree, specializing in Eating Disorders, in 2008. Caren is also a co-founder of Endangered Bodies, a global non-profit organization whose mission is to promote body-positive images and messages and challenge toxic beauty culture and industries that profit from unrealistic body and beauty standards.

Caren’s work has been exhibited nationally and internationally, prolifically, since the late 1980’s. She has been a featured artist in shows like The Optimist Online, La Strada, and Divine Exhibition among others; she has won awards and mentions and has been published. Most recently, her work appears in the poster exhibition, “Good Trouble-You Decide”, in Washington D.C., in honor of the late John Lewis.

Dedicated to challenging racism, misogyny and sexism in her painting and therapy practice, Caren focuses on identifying and understanding the societal conditions that undermine people’s agency, freedom and choice. Her paintings, both psychological and political, explore the consequences of denied humanity and grapple with the experiences of race, gender and sexuality; physical and sexual abuse; agency and identity; objectification and sexualization.